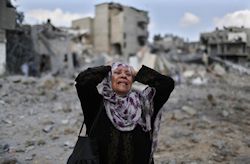 The Unfolding of a Human Tragedy

The Unfolding of a Human Tragedy:

On the Israel-Palestine Issue

The below is an edited transcript of a Bread and Roses TV interview with Nira Yuval-Davis, an Israeli Diasporic Jewish dissident:

Maryam Namazie: I wanted to ask you about the Israeli-Palestinian issue; it’s a human tragedy unfolding before our eyes.

Nira Yuval-Davis: It is a human tragedy and it’s more than that. It’s important to emphasise that this is not something that has started now or even in 1967 or 1948. This is something that has been going on in different ways (and not to the terrible way that it is now though it has always been in many ways horrible) since the beginning of the settler-colonial project of the Zionist movement. The Zionist movement sought to solve the so-called ‘Jewish problem’ – the terrible persecution and pogroms of Jews and anti-Semitism in Europe that culminated in the extermination and genocide of Jews under the Nazis. They sought national liberation but because of the dispersal of the Jewish population did it in a manner that was popular during that time – of settler-colonialism.

In such projects, the indigenous people, in this case the Palestinians, were completely invisible, or when they were visible, there were all kinds of assumptions that either they will disappear (and settlers were always happy to ‘help’ the indigenous people to ‘disappear’ by various acts of genocide), assimilate or like, in the utopian Altneuland (Old New Land) of Hertzl, they would willingly become second-rate citizens.

What’s happening now in Gaza is of course the latest manifestation and the whole evolution and various dislocations that this country has had during more than 100 years, and with all its national, regional and global implications.

Maryam Namazie: When you look at this situation, you find people mainly either siding with the Israeli state or siding with Hamas and the Islamists, whereas in fact there are so many people who are opposed to both and who want real peace.

Nira Yuval-Davis: We should not forget that Israeli security originally helped to bring about the birth of Hamas in the same way that the Taliban was helped and supported by the CIA. This is because they thought that the British imperial policy of ‘divide-and-rule’ would be the best weapon to weaken the PLO and divide the Palestinian resistance. Unfortunately, they succeeded too well but, of course, in their kind of racist superiority they didn’t think that Hamas and the Palestinians in general are not just puppets; they have their own agency and would use the support that had been given to them to promote their own project, which was Muslim Fundamentalism.

And unfortunately now, this is a rising political project of belonging and we see for the first time in the history of the Middle East a series of territories controlled by Muslim Fundamentalists – ISIS in Syria, what is happening in Iraq and Libya, the ongoing fight in Egypt… So we shouldn’t see the rule of Hamas in Gaza in isolation. And this is one of the reasons that once the PLO was willing to have a unity government with Hamas, Israel became so scared by this.

In a way, what is happening now is a direct result of the Israeli government being absolutely determined not to facilitate this unity government and in this sense they achieved this immediate goal, At least for now, but at what cost? The other goal was to end Palestinian resistance, especially in Gaza, which has faced a complete blockade especially now that the military Junta in Egypt is cooperating so closely with Israel. Gaza has no outlets on the Egyptian side, Israeli side or via the sea. In a way they have almost nothing to lose, except, of course those they are very willing to sacrifice – women and children and the people. But, on the other hand, people will not resist them because there is no alternative unless Israel and the world, by exerting pressure on Israel, will allow the space for alternatives to emerge. Otherwise, they are not going to exist.

Maryam Namazie: When you look at the situation, you get a sense that neither the Israeli government nor Hamas want peace. They don’t want a solution because they feed off of each other and use the situation for their own legitimisation.

Nira Yuval-Davis: When people say peace (and in Israel I grew up with this kind of notion of peace), each side wants peace on condition that nothing else changes. Israel wants peace with its privileged position intact. And the Palestinians may agree to peace when they’re in a dominant position – when the whole settler project ends.

Yet, you cannot solve one calamity by creating another in the same way that the persecution of Jews should not have been solved by the establishment of a Zionist settler-colonial state. The reality is that there are a people who have had no other homeland for more than 100 years and they belong to that country like other settler-colonial populations in the United States, Australia, Canada and South Africa. The people are there and need to continue to be able to live there.

Unfortunately unlike in South Africa there hasn’t been an emergence of a counter-ideology in which both the indigenous people and the settlers want co-existence and peace on equal terms. There have been beginnings, some years ago, but, of course, at the moment people don’t see the space.

One of the differences that one can see is that in 1982 when Israel invaded Beirut, there was a mass demonstration of more than 40,000 Israelis, most of whom still saw themselves as Zionists, who protested against the war. Now, there are several hundreds and they are often beaten up. The extreme-Right in Israel is now in a mode of terrible celebratory rationalisation like never before. I saw videos of people dancing ‘death to the Arabs’ and celebrating the killing of children who were killed in the UN school in Gaza, chanting that Palestinians (and Israeli Leftists) are not human beings. I also heard that extreme-Right activists were beating up people in the street if they refused to say ‘death to the Arabs’. This is a fascisisation in a way that is unprecedented in the history of Israel. Although racist ideology has been there from the beginning, it has never ever been so horrific. And this is why it is so frightening. The other side, too, is not going to see sudden enlightenment and humanism and tolerance. Everything is just going to reinforce each other. This is really bleak.

Maryam Namazie: It’s bleak; do you see any hope for the resistance?

Nira Yuval-Davis: I think the politics of hope is very important in order for us not to completely despair and give up. In this sense, Gramsci’s pessimism of the intellect and optimism of the will is very important. And there are youngsters as well as older people who see the paradoxes – the horrible catch-22 situation – and they do want a way out. But emotions are not enough. You need to have some kind of a lever of power to be able to change things. And this is why, unfortunately, the way things are now only the superpowers are going to be able to put enough pressure on Israel in order to do it.

However, today there was a declaration of 72 hours of so-called humanitarian ceasefire that was broken by both sides after 2 hours. They were all supposed to meet in Egypt. Very interestingly also in these recent rounds, we see a much closer intervention by the Gulf regimes of Qatar and Saudi Arabia and as well as Turkey. The interests of the regional powers in oil economies are much more focused on Gaza these days, at least partly because Gas has been discovered in the Mediterranean, near Israel, Gaza and Cyprus.

Maryam Namazie: What do you think the solution is to the situation? How can you get a two-state solution?

Nira Yuval-Davis: Most of those who promote a two-state solution see the conflict between Israel and Palestine as a question of territories and borders. Indeed in Gaza it does look as if it’s a territorial conflict, after the Israeli settlements were dismantled by the withdrawal under Sharon because they didn’t want to continue a direct role in Gaza as it is such a horrible mess for them. Although what Israel has declared to be a so-called buffer zone is already more than a third of this very tiny territory of Gaza in which millions live, This in itself is horrible, but beyond this we need to remember that more than 20% of Israeli citizens are Palestinians and there are so many settlers on the West Bank since 1967 – almost 50 years. So you cannot solve it by simply dividing the country into two-states unless you are going to generate a tremendous expulsion or at least exchange of population.

Of course something like this has happened in the Nakba of 1948 during the creation of the state of Israel and of the Palestinian refugee problem. Importantly, in the so-called Oslo peace process in which the two-state solution was discussed, the refugees were kept completely out of the picture. So, where are they going to live? Most of the people have loyalty and a feeling of belonging to their own village or to their own region. Israel does not have borders in the conventional sense of the term nor does Palestine.

So probably, eventually, like in South Africa, like in other settler societies, people will have to learn to live with each other or create some kind of equitable and agreed process. But at the moment the underlying conditions for either solution does not exist. You need a process of rapprochement in which some trust will be built. There was a historical window of opportunity after the first Gulf war, in the Madrid conference, in which Israel for the first time realised that it cannot solve the conflict in a military way; in which they realised that the United States is their ally but in the Gulf war they were embarrassed by them; they forbade them to fight and they felt completely powerless. So, at this time was an historical opportunity and negotiations started in Washington. However, at the same time, in the backrooms in Oslo, they had a parallel process in which peace was used as a continuation of the war in order to crystallise Israeli domination over the Palestinians. And, as we all know, eventually all this broke down and with it the beginnings of trust and the beginnings of hope… and broken trust and hope are much more difficult to re-establish.

So in some way, when we were all a bit more innocent (before the beginning of the Oslo process), it was easier than it is now. But of course, eventually we are part of history so there will be some kind of a resolution even if this resolution will be the continuation of Israel as a warfare society and the continuation of the Palestinian society as a refugee society. Or the other way around… But there is no end of history, unlike in chess when a game is finished. History never finishes; it always continues to move and metamorphose in a way that all too often – for us on the Left, feminists, anti-racists and anti-fundamentalists, – is not what we would like to see or struggle to achieve. But that’s one of my down moments…