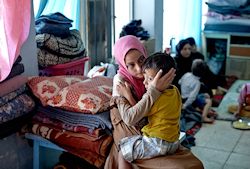 The below is an edited transcript of a Bread and Roses TV interview with Houzan Mahmoud, International Spokesperson for Organisation of Women’s Freedom in Iraq:

Maryam Namazie: What is the situation in Iraq for women today with the attacks by ISIS (Islamic State of Iraq and Sham)? There have been reports of increasing rapes and sexual Jihad.

Houzan Mahmoud: In any conflict situation, the first received reports are of attacks on women, restrictions on their movement as well as rape. These are not new of such Jihadist movements or groups, which are heavily armed and extremely primitive. They have no respect for human rights or women’s rights. According to news reports, Islamists are going to houses and to families and marrying young girls or children in what they call Jihadist Nikah – which is basically child abuse and against children’s rights and human rights. They are also carrying out lots of killings and public executions. And they are carrying out terror at all levels – which is really dangerous.

Maryam Namazie: In new situations like this, the clash between the general population and the Islamists can be seen clearly. After a while, we are told that people want Islamists and Sharia law, but at the beginning you can see the masses of people fleeing and how very much Islamist values are at odds with the local population.

Houzan Mahmoud: Thousands of people from day one of the attacks have fled to Kurdistan; Kurdistan is full of refugees from the south part of Iraq particularly from Mosul and the surrounding areas. They are seeking refuge in our areas because it is actually the only place that is safe for them. If they were happy with these groups, why would they leave? On the other hand, there has been news that some people in the city welcomed ISIS and that goes back to the Maliki government’s treatment of people in Mosul (which is apparently, according to what is officially said in Iraq, a Sunni majority area). This goes back to the erroneous politics where human beings are reduced to religious beings – sects of religion, for example, Sunni, Shia…

People in Iraq are no longer citizens. You are either: Sunni, Shia, Turkman, Kurd or Arab…even Arab doesn’t have much meaning anymore, in my opinion, because they are divided between Sunnis and Shias.

ISIS doesn’t really represent the Sunni population, that’s if we can call it the “Sunni” population. I myself don’t think religion is something that people should identify with but let’s say that people call themselves Sunnis, still ISIS is not a representative of the Sunni population in Iraq. We must make a very huge distinction between politicized Islam, politicized religion, and the actual faith where people pray or fast and don’t actually want to politicize it, where religion is a personal matter. There is a huge gap between that wrong politicized representation and religion as we know it in society, which is practised by most of our families, my mum and your mum and other people. They never want to see groups like ISIS or Al Qaeda or anybody like that actually represent them and speak on their behalf and kill on their behalf. So I think this is the reality and that’s where the story is lost; that ISIS is nobody’s representative!

Maryam Namazie: You make a good point about the fact that there are no longer citizens in Iraq and in many countries actually. Part of the problem is the ethno-cisation and religion-isation of Iraq. A large part of it has to do with how it was brought into being after the US attack. How much of a role do you think that the US attack has played on the situation that we’re seeing today?

Houzan Mahmoud: Certainly it has a lot to do with the US invasion of Afghanistan previously, and later on of Iraq, whereby these various political Islamic groups were created or supported or backed against the other. So there has been a Western or an imperialist hand behind the situation, whereas also there is a history to the ancient feud or conflict between the Sunnis and Shias. Let’s not forget that Islam was never secularised in our countries and it was never pushed back to where it belongs. And most governments, even from the Ottoman Empire or the Persian Empire before or many other empires before, religion or Islam were endorsed and some sort of Sharia law was in place. But after the fall of the Ottoman Empire and the remapping of this so-called Middle East and the division of Kurdistan into four pieces – one to Iran, Iraq, Turkey and Syria – we have seen a lot of trouble there. For example, let’s say Kurds are known to be Sunnis but we have never had a fundamentalist religious movement in our country. There were some political Islamic groups but actually because of elections now they got very low votes this time. So Kurdish society, in my opinion, has always been secular in one way or another; it had never condoned fundamentalist or the kind of Islamists that we know. Whereas in the South, even during Saddam’s regime, there were political Islamic groups, which were highly oppressed by Saddam’s regime and they were really highly controlled. So they could never gain momentum and popularity but after the invasion they were unleashed. They came out of everywhere – from Iran, from Europe… They came back. They are a kind of political merchants or warlords playing with people’s feelings by saying all Sunnis have been oppressed; Saddam was Sunni and he oppressed the Shias. Now the Shias mobilise and rally people behind them with Saddam as a symbol of Sunnis. So you see there’s a lot of these Sunni-Shia problems. And there are a lot of political parties inside and outside power who are actually using this. That’s where the problem is.

I think both the US and UK have had a very negative role on the Middle East for a very long time and specifically from 2003 onwards. They have created this puppet regime in Baghdad, a regime that is made up of ethno-sectarian groups whereby actually nobody agrees with the other and nobody talks to each other. And there are almost fights between the fractions – between the Parliamentary groups, because they are Sunni or Shia or they are Kurd so they don’t agree on anything. Corruption is widespread as is political violence. Maliki has his own prisons torturing people; other groups carry out their own paramilitary killing and kidnappings. So it’s a zone of terror. And nobody knows why or who is behind all of this. Iran plays a very negative role; Turkey too. There is oil in Kurdistan; they have a very big eye on that. And they are actually benefitting from it; Iran the same. And on the question of independence for Kurdistan, of course, I can say the majority of Kurdish people want independence.

Maryam Namazie: Do you think independence is a possible solution now?

Houzan Mahmoud: I think it has to be a possible solution. Kurdish people or the political groups, at least, helped re-create Iraq after 2003. But it doesn’t work; this government has to fall, in my opinion. A government that is based on the concept of ethno-sectarianism and religious sects and conflicts and ignores the people has to collapse. If people can no longer tolerate each other and can no longer live because this is Sunni or Kurd or what have you. I mean the Kurdish question is a very different question from the Sunni-Shia issue. It’s much more historical and it’s the legitimate right of people to actually have a say about their own future.

I am Kurdish, of course, Leftist and Internationalist. I don’t like borders whatsoever and I don’t think they have helped humanity at all. We are all made enemies of each other just because you are Iranian; he is Iraqi, she is Kurdish… And now we are being reduced to religious sects and, within religions, to Shia/Sunni… This liberal post-modernist creation of so many values and identities has led humanity to a very tragic situation where we can no longer talk within the same religion. I mean Sunni-Shia – what the hell is that? It’s part of the same religion so each of you go to your own mosque. Now this one wants to blow up that one’s mosque. You know it is just crazy where human beings are going in this day and age… in 21st century whereby humanity, social movements, political movements have gained a lot in terms of human rights, children’s rights, women’s rights. This is not the 19th century whereby it’s the beginning of these concepts. We are in the 21st century but we are actually going back to the ancient times whereby tribes are killing each other. And it’s actually what I see in Iraq. It’s a kind of ancient conflict coming back to the fore, but in a different context and a different format.

As for the Kurdish question, it is absolutely a different question and I personally support an independent Kurdish state and that is the legitimate right of the Kurdish people. It is the right of 4 or 5 million people, particularly in Iraqi Kurdistan, but of course all other parts as well. In Syria, Kurds have been denied their rights; Turkey the same. 10,000 political prisoners and Turkey claims to be a democratic country but actually has 10,000 Kurdish political prisoners; that’s not little. Iran is the same of course.

Houzan Mahmoud: I think it is important not to fall into these divisions of religious sects; there are secular-progressive forces in this region and in these areas as well. And there are a lot of Kurdish people who want Independence for Kurdistan and their rights; these legitimate rights should be supported by the international community because in Iraq we have had genocides. Over 180,000 people were subjected to genocide whereby today we don’t even have their corpses, let alone the political imprisonments and violence. I lived under Saddam’s regime. My family were all peshmerga fighters. And, so I witnessed some of or much of this fascism that we were subjected to as Kurds. And that’s not easy really and we never want that to be repeated under the Maliki government. And I think that he’s going in the same direction as well. He’s another fascist but in a different time.

Maryam Namazie: Women are not just victims; they are also active in resisting and defending basic rights. OWFI – Organisation of Women’s Freedom in Iraq – which you are active with has been instrumental in defending women’s rights there. Tell us some of the things that you have been doing on the ground there. I heard that you’re even doing work in areas that have been under ISIS control.

Houzan Mahmoud: Yes, I’m an activist for the Organisation of Women’s Freedom in Iraq from the very beginning. From 2003 until now they have been providing shelters for battered women and uncovering all kinds of crimes and violence against women in Iraq even at risk to their lives to get this information out on the rapes and tortures in prison and by the Maliki regime to the killings by the US and to the using of chemical weapons whereby a lot of Iraqi children have been ill and also to the recent situation whereby a lot of women are fleeing the Islamic attacks to the southern cities as well as to Kurdistan. OWFI tries within its limits to basically support these women as much as possible; they go to some of the camps to provide basic necessities to women and children in particular and to document some of the violations as well and to get news out on what is actually happening on the ground.