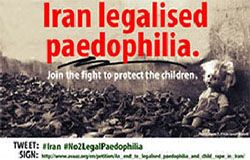 There has been a marked increase in CCTV cameras being installed in girls’ schools, particularly private ones causing concern for girls and their parents. The Islamic Assembly or Majlis in Iran passed a bill allowing a male guardian to marry his adopted child upon court approval. Children’s rights advocates denounced the bill saying it would endanger the welfare of the child, violate her rights, and is nothing more than legalised paedophilia. According to Children First, one Majlis representative said that sexual relations with adopted

children is permissible under Sharia under marriage as they are not considered real children. According to one report, officials in Iran have tried to play down the sexual part of such marriages, saying it is in the bill to solve the issue of hijab [head scarf] complications when a child is adopted. An adopted daughter is expected to wear the hijab in front of her father, and a mother should wear it in front of her adopted son if he is old enough. As many as 42,000 children aged between 10 and 14 were married in 2010, according to the Iranian news website Tabnak. At least 75 children under the age of 10 were wed in Tehran alone.

Iran stoning case, Sakineh Mohammadi Ashtiani, wrote an open letter asking the media and public to ask Rouhani why he doesn’t release her. She says: “I want to hold my children in my arms. Please help me! For three years I have been consumed by longing for liberty and the chance to breathe freely. They told me that if I collaborated on a film for Press TV, I would be released. Press TV made its film and went on its way and there was no more talk of my freedom. They say that my case is in Tehran and must be decided there. I entreat you to ask President Rouhani, a resident of Tehran, whether he has any news of my case. Doesn’t he want to free me so that I might finally travel with my son and embrace freedom once more?”

According to the International Committee Against Execution, since the election of Hassan Rouhani, at least 213 prisoners have been executed, including a number of women.

Per official figures, there are 600 women judges in Iran, most of who work in family courts. They are however not allowed to sign their decisions; a male judge must do so on their behalves.

Ali Jannati, a senior cleric in Iran urged tougher restrictions on women in streets, universities and state institutions. He said the hijab of female students should be checked at university gates and students graded based on their covering. He said: “why is it that female students who want to study take off their Islamic dress after they enter the university and taint themselves? Student wants a good grade and will do anything for it.” “If her veiling is bad, don’t let her into the university and let her feel it in her grade. This is not troublesome. Start here! If you put someone at the university gate and tells students that if they don’t observe proper veiling it would affect their grades, they would certainly pay heed.”

report, over seventy Allameh Tabatabaei University students who had been thrown out of their faculties or suspended from their departments gathered outside the dean’s office and demanded that he allow them to return to their courses. Also, a group of women’s rights activists and student activists filed an official complaint with the Iranian Supreme Court of Justice. They were objecting to a new plan which regards women as ‘unfit’ for certain courses, and prohibits some of the major universities from enrolling them. The protestors made three demands to the Science Ministry and the Department of Higher Educational Assessment, namely the withdrawal of the scheme, the restoration of rights to students affected by it, and a ban on similar schemes in the future.

A recent study found school books to be predominately male-oriented with very few female photos, characters and writers. Also the males were shown to be smarter, stronger, more worthy than the females in the texts.

In a new law on families, temporary marriages do not need to be registered any longer. Temporary marriage is a fixed or short term marriage permissible in Shia Islam for which the duration and compensation is decided in advance.

During the election campaign, Rouhani said that he would strive to ensure that women feel secure on the streets from patrol harassing women who they deem to be improperly or badly veiled. He said: “Girls must maintain their own chastity and hijab.” He also said the youth “should obey religious norms.” After the election, harassment of women and youth has been stepped up.

Mohammad Shahroudi Hosseini, the Kurdistan representative of the supreme leader Khamenei has said: “The best way for women to achieve happiness is to see less of men and for men to see less of women.”

Women wearing leggings called “supports” are being put under pressure. Some officials have said leggings lead to a “violation of the mental and physiological peace” of Iran’s youth and are urging their arrest. Niloofar, a student in Tehran says: “If more than ten women do something in this country, it suddenly becomes an offence and they start looking for ways to stop it.”

A bill being debated in Iran’s Majlis aims to limit employment opportunities for single girls and childless married women. Many see it is as yet one more state ploy to keep women in the home.

Gholam Reza Hassanpour Ashkezari who is in charge of the National Merchants Guild has called on merchants to refuse to sell to badly veiled women and to post religious teachings in shops to advise badly veiled women to properly veil.

There has been an increase in Iran’s morality police detaining women who they deem are improperly veiled. Mehr news agency quoted the Iranian Police Chief Brigadier General Esmail Ahmadi-Moghaddam as saying that the moral security plan has not been halted and a new phase has begun.

Elham Asghari was denied a swimming record because her Islamic bathing suit was deemed too revealing and showed her feminine features. “I’m not going to submit to bullying, and I ask you not to submit either,” she said. “I ask you to give your utmost effort to achieve your goals. I won’t give up! I beg you not to give up in the face of their lies. Swimming is not exclusively for men. We ladies can do well, too!

During Hassan Rouhani’s inauguration, women journalists sat on the floor whilst men were seated.

Official organs of the Islamic regime, including an organisation representing the Supreme Leader in Iranian Universities, have refuted claims of rape prior to execution for the first time. In a recently published book and documentary, Justice for Iran demonstrate once more the rape of virgin girls who were executed for their political activities during the 1980s through the means of temporary marriage in at least a few cities as part of an organised process carried out with the knowledge of senior officials.

A new campaign urging Saudi Arabian women to hold a “day of defiance” against the country’s driving ban is underway. An online petition entitled “Oct 26th, driving for women”,

had, at time of press, amassed more than 11,000 signatures in just two days. A Saudi sheikh has recently said women’s driving will affect the pelvis and ovaries resulting in children born with “clinical disorders.” In the past the highest religious council said women driving would mean no more virgins and an increase in homosexuality.

When attorney for a raped Saudi Arabian woman appealed a Sharia Court decision of 90-lashes for being raped and beaten by 7 men, the court doubled the punishment. The court also said that the “charges were proven” against the woman for having been in a car with a strange male, and repeated criticism of her lawyer for talking “defiantly” about the judicial system, saying “it has shown ignorance.”

Afghan experts and advocates say the number of women and girls fleeing intolerable domestic conditions has skyrocketed, keeping the handful of urban shelters constantly full. In addition, according to Afghan human rights groups, the number of girls and women charged with moral crimes (usually some variation of zina, or sex outside marriage) has increased 50 percent in the past several years. Nearly 400 are imprisoned for moral crimes.

Sushmita Banerjee, an Indian woman, who wrote a popular memoir about her escape from the Taliban, has been shot dead in Afghanistan by Islamists. She was working as a health worker and had been filming the lives of local women as part of her work. Police said Taliban militants arrived at her home in the provincial capital, Kharana, tied up her husband and other members of the family, took Ms Banerjee out and shot her. They dumped her body near a religious school.

The Tunisian interior minister has called for a stop to young Tunisian women leaving for Syria on “sexual jihad.” The Arabic term (jihad al-nikah) describes a phenomenon of women traveling to the battlefield to provide comfort—and sexual favors—which Islamists consider the practice a legitimate complement to Holy War. “After the sexual liaisons they have there in the name of ‘jihad al-nikah,’ they come home pregnant.”The minister did not say how many women have traveled to Syria, though local media reports have suggested hundreds of women have done so. He added that the government has prevented some 6,000 Tunisians from traveling to Syria.

Amira Osman Hamed says: faces trial in the Sudan for refusing to wear the hijab and will be flogged if convicted. She says she’s prepared to be flogged to defend the right

to leave her hair uncovered in defiance of a “Taliban”-like law. She says: I’m Sudanese. I’m Muslim, and I’m not going to cover my head.

The Supreme Religious Court in the Hamas-controlled Gaza Strip is considering legal amendments allowing women to divorce their husbands when they can show proof that their married life cannot go on.

nal injuries due to sexual trauma. Human rights organisations are calling for the arrest of her husband who was five times her age.

A 15-year-old girl who was sentenced to 100 lashes after being raped by her step-father has had her punishment overturned by a Maldives court after international outrage.

A plan to make female high school students undergo mandatory virginity tests has been met with outrage from activists, who argue that it discriminates against women and

violates their human rights. Education chief Muhammad Rasyid, of Prabumulih district in south Sumatra put forward the idea, describing it as “an accurate way to protect children from prostitution and free sex”. “This is for their own good,” Rasyid said. “Every woman has the right to virginity … we expect students not to commit negative acts.” The test would require female senior school students aged 16 to 19 to have their hymen examined every year until graduation. Boys, however, would undergo no investigation into whether they had had sex.

Two months ago, Arifa Bibi, a young mother of two, was stoned to death by her relatives on the order of a tribal court in Pakistan for having a mobile phone. She was buried in a desert far from her village.