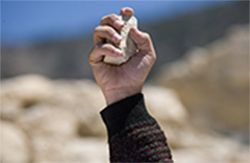 Written by Maryam Namazie on 7th November 2013. Posted in Campaigns.

According to the Independent, two months ago, a young mother of two was stoned to death by her relatives on the order of a tribal court in Pakistan. Her crime: possession of a mobile phone. Arifa Bibi’s uncle, cousins and others hurled stones and bricks at her until she died. She was buried in a desert far from her village. It’s unlikely anyone was arrested. Her case is not unique. Stoning is legal or practised in at least 15 countries or regions. And campaigners fear this barbaric form of execution may be on the rise, particularly in Pakistan, Afghanistan and Iraq. You can find a list of death by stoning in Iran since 1980 compiled by the International Committee against Stoning here.

Sign a petition by Women Living Under Muslim Laws calling for an end to stoning. This particular campaign to end stoning follows the pioneering work of Mina Ahadi and the International Committee against Stoning over many decades.