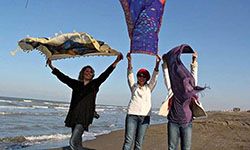 Tehranˈs Interim Friday Prayers Leader Hojjatoeslam Kazem Sedighi recently said: “In certain towns and cities, some have been seen to have removed their headscarves. This lack of hijab has infiltrated homes via internet and satellite TV…”

Hadi Sharifi, a “media activist” interviewed by Tasnim, a state-run news agency in Iran controlled and operated by the Iranian Revolutionary Guards Corp, has said when a man forces himself onto a woman because she is “showing off her beauty”, this should not be considered rape because it is natural and instinctual for a man to be drawn to the beauty of a woman and seek sex with her. Since men have not granted women permission to show off their beauty, then men who become aroused by the “nakedness” of women do not need the permission of women to pursue their sexual urges…

Recently, too, thousands held a protest in Tehran, urging the Islamic regime to confront what they say is the increasing flouting of the Islamic dress code.

Clearly, the Stealthy Freedom Facebook page, where women in Iran are posting unveiled photos of themselves despite the compulsory veiling law has hit a nerve with the regime and its apologists. And rightly so. The veil is an important symbol of the regime. One of the first things Islamists did after expropriating the Iranian revolution was to impose compulsory veiling. The slogan of their thugs attacking women protesters was “either veil or a smack” (ya rusary ya tusary).

Throughout its 35 year rule, women have challenged the regime’s compulsory veiling law by transgressing them; improper or “bad” veiling has always been a form of resistance to the regime despite the morality police’s constant harassment, and risks of fines or imprisonment.

The unveiling of women, however, in broad daylight, for all the world to see is an even more fundamental challenge to the regime and its rule.

The unveiled woman is the beginning of the end of the regime. A female revolution has long been in the making and it is this movement that will bring the regime to its knees. And not a day too soon.