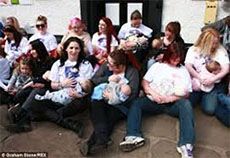 Thousands of people have attended breastfeeding protests in support of a Staffordshire mother who was labelled a “tramp” for feeding her baby in public.

The breast is a thing of concern for many. To show it or not, to look or not. To breastfeed or not. In public that is because women’s breasts it seems are public property.
It’s okay for women to flash their boobs, just ask any newsagent. Our breasts, the naked kind, are good enough to be prominently displayed on many newspapers and magazines in any newsagent you enter.
And they sell very well.
It is funny how we seem to be discussing the same things over and over again. For years, for decades, for eternity. Breastfeeding in public? Women going topless?
When you flash your boobs for money no one bats an eyelid. Breastfeeding your baby in public seems to turn you into a disgusting, attention-seeking cretin.
Until today I didn’t even know that breastfeeding women are protected under the Equality Act in Britain and shall not be harassed for doing so.
Shame has a louder voice than the law, and so women are still turning around, stepping aside and crouching in corners with their babies. The act of breastfeeding is apparently so hideous to many that the baby has to eat whilst its face, or rather the breast, is hidden under a piece of cloth.
I have tried hard to understand how and what people can find disgusting about a baby eating in public. The only thing I can come up with is that the attitude itself is disgusting beyond belief.