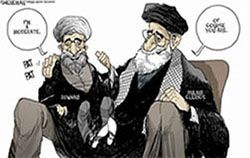 Hassan Rouhani, the new president of the Islamic Republic of Iran, has been hailed as a moderate and reformer. Whilst he smiles abroad, however, the attack on women and girls in Iran continues unabated. Rouhani is not a reformer in any sense of the word. Reform in the real world means real changes in the laws and people’s lives. Whilst Rouhani’s rhetoric and style are clearly different from his predecessor Ahmadinejad, in substance they are fundamentally the same. Everyone knows that anyone who has the opportunity to run for the office of president must be vetted by the Supreme Spiritual Leader and the Guardian Council. They must be a stalwart of the regime and Rouhani has proven his loyalties since its establishment. He was part of Ayatollah Khomeini’s entourage when Khomeini returned from exile in 1979; deputy leader of the Iran-Iraq war in the 1980s; a Member of the Islamic Assembly or Parliament for 20 years; Chairman of the Supreme National Security Council for 16 years; and Iran’s Chief Nuclear Negotiator for 2 years. When looking at the workings of a repressive state like Iran, one has to be able to read between the lines in order to see the realities at play. It is not Rouhani who wants or must be credited for any calls for change and an end to religion’s intervention in people’s lives. It is what the people of Iran want. Credit must be given where credit is due. When the head of a theocracy that has maintained itself by slaughtering an entire generation begins to speak of rights and freedoms, it is because he and his regime have been forced to do so by the sheer might of people’s dissent and resistance. Remember this. It is not Rouhani that must be hailed but the people of Iran, and especially its women’s liberation movement. Finally, saying Rouhani is more of the same old same old is not in any way a support of US-led militarism or a call for the continuation of the back-breaking economic sanctions that are adversely affecting the public. Threats of war and economic sanctions are the other side of the coin of the regime and its oppression of the people of Iran. They have to end.