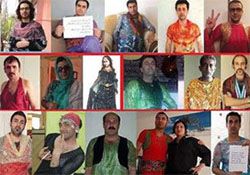 Written by Maryam Namazie on 22nd April 2013. Posted in Campaigns.

On Monday 15 April 2013, the Islamic regime of Iran’s security forces paraded a man dressed in women’s clothing and a hejab on the streets of Marivan, Iranian Kurdistan in order to punish and humiliate him.

A judge had sentenced three men from two feuding families to be “humiliated” by wearing women’s clothing in public. The regime’s anti-women laws mean that women are seen to be the source of fitnah, corruption and harm; the greatest humiliation that can be bestowed on a man is to have him dressed as a woman!

On Tuesday, red-clothed women started a protest and called on others to join. 400 men and women joined in a march throughout the city. The police arrested some of the protesters; all of whom were subsequently released.

On Friday 19 April, there was another public protest, in which there were banners saying: “Being a woman is not a source of humiliation or punishment”. Many of the protesting women are wearing red.

The protests are gaining prominence in Iran and elsewhere. On Monday 21 April, there was a gathering in Iraqi Kurdistan is support of this move. Petitions are being circulated in towns and villages in Iran in support of the “red-clothed” women. Fitnah wholeheartedly defended the protest.