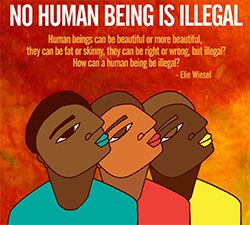 Secularism, Islamism and the Anti-Immigration Confusion

Written by Maryam Namazie on 27th December 2014. Posted in Articles.

Secularism, Islamism and the Anti-Immigration Confusion

Secularism and fundamentalism are not ideas stitched into people’s DNA

Maryam Namazie: Restrictions demanded by Islamists are viewed as the demand of Muslims and immigrants who are seen to be a homogeneous group with no differences of opinion. Immigrants and Muslims are often blamed for all of Britain and Europe’s woes but particularly for the rise of Sharia courts, the burqa or 7/7. Your views?
Kenan Malik: When I was working on my book From Fatwa to Jihad, I interviewed Naser Khader, a Danish MP and one of the best known Muslims in the country. He recalled a conversation he had had at the time of the Danish cartoon controversy with Toger Seidenfaden, editor of the left-wing newspaper Politiken. ‘He said to me that the cartoons insulted all Muslims’, Khader remembers. ‘I said I was not insulted. And he said, “But you’re not a real Muslim”. That sums up the liberal attitude towards Muslims. You are only a ‘proper’ Muslim if you want to ban Danish cartoons, or are offended by The Satanic Verses or think that Monica Ali’s Brick Lane is demeaning to your community. Similarly, you are only a proper Sikh if you are offended by Gurpreet Kaur Bhatti’s play Behzti. Someone like Naser Khader, on the other hand, or like Salman Rushdie or Gurpreet Kaur Bhatti, or Monica Ali, are seen as too liberal, too ‘Westernized’, too progressive, to be truly of their community. The consequence has been that the most reactionary figures get to be seen as the authentic voices of those communities. And in presenting Muslim communities in this fashion, liberals do the racists’ job for them. The protests against the cartoons, as Khader put it, ‘were not about Mohammed. They were about who should represent Muslims’. And what was ‘really offensive’ to him was that ‘journalists and politicians see the fundamentalists as the real Muslims’.

It’s one of the ironies of the liberal multicultural view. Liberals argue for multicultural policies on the grounds that we live in a diverse nation. But they seem also to believe that such diversity somehow magically stops at the edges of minority communities. They wash over differences and conflicts in those communities, seeing them instead as fixed, homogenous groups with a single set of views, primarily driven by faith. And they rely on so-called community leaders to be suitable judges of what is and is not acceptable or necessary for that community. As a result, progressive voices often get silenced as ‘inauthentic’ or as not really being of that community.

Maryam Namazie: Free expression is a demand of those without power vis-a-vis the powers that be. It seems more often than not, it is those with power and influence making such demands at the expense of those who need it most. I’m thinking of Islamists using rights language to deny rights and expression. Free speech and expression have often been censored under the guise of respecting the sensibilities of Islamists (couched in terms of Muslim or minority sensibilities).

Kenan Malik: There is a strand of leftwing argument that insists on censorship as a necessary shield to protect the powerless, from the prejudices spewed by the media, for instance, or from hate speech. It is certainly necessary to combat prejudice and to confront hate speech. But censorship is no weapon through which to do so. The question to ask yourself is this: who benefits from censorship? The answer is those who have the need to censor and the power to do so. And they are not the powerless, but those who seek to protect their power.
Any kind of social change or social progress necessarily means offending some deeply held sensibilities. ‘You can’t say that!’ is all too often the response of those in power to having their power challenged. To accept that certain things cannot be said is to accept that certain forms of power cannot be challenged.
The notion of ‘protecting sensibilities’ suggests that certain beliefs are so important or valuable to certain people that they should be put beyond the possibility of being insulted, or caricatured or even questioned. The importance of the principle of free speech is precisely that it provides a permanent challenge to the idea that some questions are beyond contention, and hence acts as a permanent challenge to authority. This is why free speech is essential not simply to the practice of democracy, but also to the aspirations of those groups who may have been failed by the formal democratic processes; to those whose voices may have been silenced by racism, for instance. The real value of free speech, in other words, is not to those who possess power, but to those who want to challenge them. And the real value of censorship is to those who do not wish their authority to be challenged.

Maryam Namazie: Those who scapegoat immigrants and Muslims say they bring with them “alien cultures that are incompatible with Britain or the west”.

Kenan Malik: Almost every wave of immigration has, at that time, been seen as the imposition of incompatible alien cultures. So, at the beginning of the twentieth century there was a great uproar about Jewish immigration to Britain, an uproar that led to Britain’s first immigration controls in 1905. Without such a law, the Prime Minister Arthur Balfour claimed, ‘though the Briton of the future may have the same laws, the same institutions and constitution’, nevertheless ‘nationality would not be the same and would not be the nationality we would desire to be our heirs through the ages yet to come’.