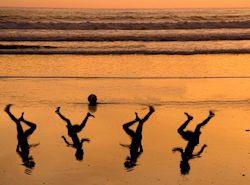 Murder Can Never Be Justified

Murder Can Never Be Justified — On the Israeli Offensive On Gaza

Murder can never be justified whatever the reason – security, a cause, or strongly held beliefs.

The pummelling of Gaza by the Israeli state – from schools to hospitals – is nothing short of murder. It’s a war crime. It’s state-sponsored terrorism, no better or worse than Hamas’ terrorism and crimes.

Whilst many more Palestinians have been killed than Israelis (1,800 Palestinians – mainly civilians to 67 Israelis – 3 civilians), it’s not because Hamas hasn’t tried. It’s just that Israeli military defences are better. Nonetheless, all those killed are human first before they are Israeli or Palestinian. Many of them, like people everywhere, want to see themselves and their children live another day.

In taking sides with those committing war crimes, we fail to see the humanity of those no longer with us and in the process, begin to lose our own humanity.

In this latest Israeli offensive on Gaza, the world truly does “stand disgraced”.