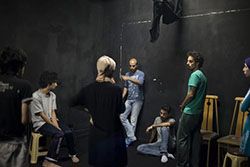 Kiana Hayeri’s photographic project Beyond the Veil shows a predominantly young Iranian population (more than seventy-five percent is under the age of thirty-five) challenging compulsory hijab or veiling and restrictive rules in the way they dress or interact with the opposite sex despite fines, imprisonment and worse.

Many take risks to put on a bit more makeup, wear more colourful clothing, reveal bare arms, push their headscarves farther back or do things behind closed doors that are banned. Embodying a personality and determination of this generation, Beyond the Veil captures, in subtle and quiet ways, a window into this disobedience both behind closed doors and on the streets of Tehran.

This project not only explores the ‘veil’ in its literal sense of the word, the Hijab, but also as the curtain that delicately separates public and private lives of Iranians.