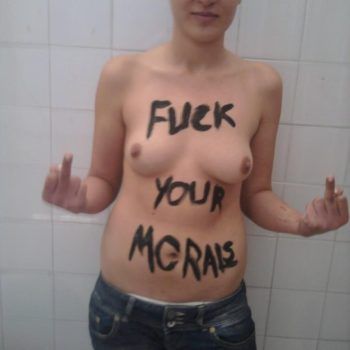 Written by Maryam Namazie on 7th March 2017. Posted in Articles.

My latest piece in The Freethinker to mark International Women’s Day.

Wherever Islamism gains power and influence, it comes for women first. And it’s always a sign of worse to come, hence the saying: ‘the freedom of society is measured by the freedom of women.’

Islamism but also the Christian-Right, Buddhist-Right,  Jewish-Right,  Hindu-Right, Sikh-Right … have turned misogyny into an art form. They police women’s behaviour and sexuality to make certain it doesn’t challenge male “honour”.

To ensure compliance, modesty rules are enforced by any means necessary – whether by threatening and shaming a Muslim woman twerking in public in Birmingham, spitting at an “immodest” 8 year old girl in Israel, disappearing the babies of unwed mothers in Ireland, barring women from straddling motorcycles and dancing in public places in Indonesia’s Aceh province and even stoning women to death in Iran in the 21st century.

“Immodesty” – anything from singing in public, laughing out loud, gender mixing, to the refusal to veil or conform – are deemed dangerous for the family, community, nation and society and in need of suppression and control.

In this “communally-based politics … women are seen not as individuals with rights but as bearers of their community’s honour, to be protected or raped, depending who they are”. ISIS’ Yazidi sex slaves are the most heinous case in point.

Modesty is big business, with profits made at the expense of innumerable dissenters.  Having bought into the narrative of the religious-Right, Bloomberg calls it a “modest revolution” despite the fact that there is nothing revolutionary about modesty or religion’s control over women and their bodies.

From witch-burnings, chastity belts, diagnoses of hysteria for women who had a “tendency to cause trouble” to the Iranian regime’s morality police and ISIS’ use of metal clippers to tear the flesh off any woman who might have forgotten to wear her gloves, religion and the religious-Right have always played a counter-revolutionary role in the service of patriarchy and profit and in favour of the status quo and women’s subservient status.

The veil, for example, whilst often sanitised and fetishised here in the west, has more often than not been imposed through brute force – from acid-attacks to assassinations – with unveiled or improperly veiled women blamed for every calamity under the sun. Immodest women are the source of chaos and fitnah in society.

Add to this, multiculturalism and identity politics, which legitimise and normalise religion’s “morality” that sees a woman’s “place” in the home, behind closed doors, erased and disappeared from the public space.  The far-Right, too, which juxtaposes its Christianity against a “foreign” Islam, spends much of its time defending “its” white women from the “other”, preventing mixing, and encouraging “our womenfolk to regard home and family-making as the highest vocation for their sex“.

In all religions and every religious-Right movement, the perfect “modest” and “moral” woman is the one who cannot be seen or heard.

That women refuse to comply is not thanks to religion or the religious-Right but despite all their efforts at terrorising women into submission.

That is why being a free and “immoral” woman is the greatest of “crimes” and the most potent form of resistance.

On 8 March, International Women’s Day, it would do us good to commemorate the many who refuse and resist against all odds: the mothers of Khavaran, Kurdish women fighters bringing gender equality to Rojava, the unveiling movement in Iran, the fight against male guardianship rules in Saudi Arabia, those battling Sharia courts in Algeria and Britain, the women challenging Modi and the Hindu-Right in India, those fighting for secularism in Pakistan, and against gender segregation in Israel …

Rather than veiling in “solidarity” or standing with one set of fascists against another, we should be celebrating and honouring the “bad” women, “immodest” women, “immoral” women who have refused to submit. Not just on 8 March but every day.

One of the best ways to show this solidarity, is to reiterate the wise words of women dissenters: