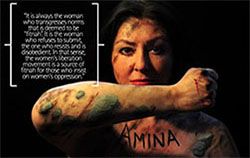 The rise of Fitnah

The below interview was published on Women’s eNews.

Women’s eNews: Why did you label the campaign ‘Fitnah’? In the email received yesterday, you say “women are seen to be the source of fitnah or affliction”, could you please elaborate?

Maryam Namazie: In Islam, women are seen to be the source of fithah or affliction. In one hadith, Mohammad, Islam’s prophet, said: “I have left behind no fitnah more harmful to men, than women.” [Al-Bukhari, Muslim]. This is a recurring theme in all major religions. There is a Jewish prayer that says: “Blessed are you, Lord, our God, ruler the universe who has not created me a woman”. In the Bible, there is one verse that says: “Her filthiness is in her skirts”. [Lam.1:8-9] There are of course many examples of religion’s misogynist perception of women. In practice, this translates into an obsession with the control and restriction of women in order to maintain everything from family honour to societal order. This is most visibly experienced for women living under Islamic laws because of Islam’s access to political and state power via Islamism or political Islam. To the extent that Islamism has power, veiling is enforced by morality police and women are imprisoned for escaping forced marriages or stoned to death for adultery. The extent of hatred towards women runs deep. Recently in Marivan, Iran, a judge ordered a young man to be dressed in women’s clothing and a hejab and paraded around the city by security forces in order to humiliate him. Being a woman is considered the greatest of humiliations. Whilst the term fitnah is perceived to be a negative one if one looks at it from the perspective of religion and Islamism, it represents something very different when looked at from another viewpoint. It is always the woman who transgresses norms that is deemed to be “fitnah”. It is the woman who refuses to submit, the one who resists and is disobedient. In that sense, the women’s liberation movement is a source of fitnah for those who insist on women’s oppression. Our movement is Islamism’s worst fitnah…

Women’s eNews: What sparked this campaign? – Is it a campaign against religion? men? religious men? a state? Who are you specifically targeting with this campaign?

Maryam Namazie: Finah represents a new movement for a new era. The brutal era of unbridled Islamism, US-led militarism and free market reign is over. Today is an era of the 99% movement and revolutions and uprisings in the Middle East and North Africa – many of them female-led. Whilst it may still be hard to see given the perceived “gains” by Islamists in the region (in fact as counter-revolutionary forces aimed at suppressing the revolutions), the change of era is palpable. Fitnah is a movement of women and men defending freedom, equality and secularism and calling for an end to misogynist cultural, religious and moral laws and customs, compulsory veiling, sex apartheid, sex trafficking, and violence against women. Whilst our focus is on Iran in particular, and the Middle East and North Africa in general, it’s an international movement. We don’t see women’s rights as being western. As women’s rights campaigners opposing compulsory veiling in Iran said during a mass demonstration in 1979: “women’s rights are not eastern or western but universal”. We also don’t see rights as culturally relative. Rights have been fought for by the working class and progressive social movements and belong to all humanity. The right to vote is not considered western even though the first country to have the right to vote was in the west. This idea of rights being western and culturally relative is stressed in particular when it comes to women rights and freedoms. Also, whilst all religions are anti-woman, our focus is on Islam and political Islam given its impact on our region and the world. US suffragette and abolitionist Elizabeth Cady Stanton said “The Bible and the Church have been the greatest stumbling blocks in the way of woman’s emancipation”. This is true in particular with regards Islam and Islamism today. Of course when speaking of Islam or any religion, we are not referring to religion as a personal belief. Everyone has a right to religion and atheism but Islam today is not a personal matter but an industry. Fitnah represents our era – our time to shine. It is we who are now on the offensive. Fitnah is a warning to Islamists: it will be our women’s liberation movement that will bring it to its knees.

Women’s eNews: Do you consider ‘Islamism’ as a form of ‘Radicalism’?

Maryam Namazie: Radicalism means going back to one’s roots. Whilst Islamism sees Islam as a tool for the far-Right restructuring of power structures, the movement is not fundamentally about going back to Islam as an ideology but about political Islam (gaining power and ruling via Sharia law). That is why different states and groups impose different rules and norms depending on their access to power and in an effort to maintain power. Some see these differences as evidence that this movement has nothing to do with Islam but this is because of political expediency rather than ideology. Also, depending on the strength of the women’s liberation and secular movement in the specific geography they operate, their version may seem more ‘moderate’ though they are all fundamentally the same. The other point that is important to make when discussing Islamism is that this movement is a contemporary one and resulted from abandoned modernisation efforts and the decline of the secular-left. Islamism, however, would have remained marginal had it not been an integral part of US foreign policy during the Cold War, i.e. to create a “green” Islamic belt around the then Soviet Union. Of course Islamism’s coming to power in Iran via the suppression of a Left-leaning revolution helped to strengthen this movement and make it into a global power source.

Women’s eNews: Some Muslim women would not be against the fact of having their rights within the framework of Islam if the religious law was properly interpreted. What is your take on this point?

Maryam Namazie: Islamic “feminists” like Shirin Ebadi will say that women have full rights under Islam and if they don’t it is because of the practice and interpretation of states. There are several problems with this position. Firstly, the Koran and Hadith (which are the saying and actions of Mohammad, Islam’s prophet) upon which Sharia law is based are full of anti-women rules and regulations (even if you choose to leave Islamic jurisprudence to one side). Stoning to death for adultery, for example, is in the hadith whilst wife-beating is in the Koran. Secondly, often when there is a discussion about women having full rights, you must ask what is meant by “rights”. Even Islamists will say women have full rights under their rule but that is because to them women and men are not equal but complementary thereby justifying difference in “rights”. Also, the problem with interpretation is that yours too is just one of many. Even if you have a “good” interpretation, it is usually a regressive imam or Sharia judge deciding for you. But more importantly I question whether a “good” interpretation is possible. If you follow the arguments made by the “good” interpretations you will soon realise the absurdity of this line of defence. Take Sura al-Nisa (the Women) in the Koran 4:34 where it says: “As to those women on whose part ye fear disloyalty and ill-conduct, admonish them (first), (next), refuse to share their beds, (and last) beat them (lightly)…” You have Islamic feminists saying that men are only meant to beat their wives with thin sticks or feathers. For Sharia judges (at least in the UK where domestic violence is a crime), as long as it is not on the face and genitals and leaves no mark, this does not constitute violence. The point is though that no woman should be beaten. Full Stop. Clearly, one cannot leave women’s rights and lives at the mercy of religious rules and forms of interpretation. Religion is a personal matter. When it comes to religion in the state and law and educational system, then it becomes a matter of political power and control. The separation of religion from the state and law is an important step in improving the status and rights of women. Looking at things on a large social scale, a majority, even if they are Muslim would prefer to live under secular rules. The conflation between Islamism and Muslim in order to enable Islamists to feign representation has meant that Islamist demands are seen to be the demands of those living in the Middle East and North Africa. But this is not the case. None of the revolutions in the region had Islamist demands, which are compulsory veiling, sharia law and Islamic states. In reality, people who have lived under Sharia law or its threats are its most ardent opponents. Finally if people really wanted to live under medievalism, if it was really people’s culture, Islamists would not need to impose their rules with such sheer brutality. The fact that they must control the streets and arrest and fine people for what they wear and what they think is evidence enough that their rule is an imposition. Of course there might be those who prefer Sharia law to secular law as there might be people who prefer to bring back slavery or racial apartheid but that is irrelevant here. Sharia law and Islamic states are oppressive. There is no “right” to oppress.

Women’s eNews: What are you planning on doing?

Maryam Namazie: Our movement plans to bring an end to Islamism. Whilst misogyny will not end with Islamism, the situation of women will improve greatly across the world as one of the leading proponents of feminicide is brought to its end.