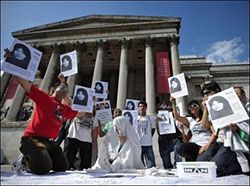 Written by Maryam Namazie on 3rd August 2014. Posted in Campaigns.

Iranian mother of two, Sakineh Mohammadi Ashtiani, who had been sentenced to death by stoning for adultery and later given a 10-year jail term instead due to public outrage has been allowed to leave prison, a judiciary spokesman said. Larijani, head of the judiciary, told Fars News Agency that “Ms. Ashtiani’s case was the source of four months of widespread attacks against the regime… this individual was sentenced to death for murder but the international groups began a controversial campaign over it…. we did not pay much attention to those efforts…. we are letting her out simply for good behaviour.” Ms. Ashtiani was the subject of one of the largest international campaigns initiated by International Committee Against Executions and International Committee Against Stoning by their founder, Mina Ahadi, who was contacted by Ms. Ashtiani’s son, Sajjad Ghaderzadeh.

“I initially received a phone call in 2006 from a man asking for help because his mother was going to be stoned to death in Iran. In 2010 I received yet another frantic call from Sakineh’s son, who informed me that his mother was going to be stoned in two days; that is when we started campaigning very strongly for her all around the globe,” said Ahadi in a telephone interview from Germany.

Larijani said that the decision was a sign of “our religion’s leniency towards women”. There was no immediate word on whether the release was permanent or whether it was subject to some form of probation.

In October 2010, Ms. Ashtiani’s son, along with her lawyer, Mr. Houtan Kian and two German reporters, who were seeking an interview with the prisoner, were arrested by Iranian Intelligence agents. Mr. Houtan Kian was accused of “acting against national security” and subjected to tortures, such as being repeatedly burned with cigarettes on his genitals, until he made a televised confession. He was sentenced to 11 years in prison along with being barred from practicing law for five years. Sajjad Ghaderzadeh, who had also been subjected to torture, was later released along with the journalists, who were charged for failing to attain press permits and were detained for a few months inside one of Iran’s prisons. Mr. Houtan Kian was freed three years later on August 20, 2013.

“Although I have not heard from Sajjad yet,” Ahadi said, “I am sure he is simply overjoyed about his mother’s pardon; he went through horrible times for years trying to free his mother.”