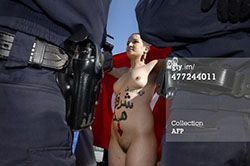 This is my body; I will do whatever I want with it

This is my body; I will do whatever I want with it

Maryam Namazie: Why did you do the nude action in Egypt?

Aliaa Magda Elmahdy: In Egypt, a woman is like a lifeless body, a corpse. This body is owned by other people. They think if she doesn’t follow the rules, it is okay to beat her, to harass her; it is okay to kill her. So the best way to say no to all of that is to say “This is my body and I will do whatever I want with it.”

Maryam Namazie; Is that how you felt too Amina?

Maryam Namazie: Your action has hit a cord with a lot of people. Do you think there is an universality to what you say? It’s not just the Arab world (though it is very important for the Arab world) but it hits a cord for everyone?

Aliaa Magda Elmahdy: Yes practices may differ but sexism is the same everywhere. Maybe the practices differ, the degree differs.

Maryam Namazie: Some people will say that what you are doing is not culturally appropriate; it is offensive and you’re not respecting people’s culture.

Amina Sboui: I think that what the old feminists did in their time was not culturally appropriate like when they asked for women’s vote or women to go to school. Times change and people change. We can’t use the same methods that they use. When we go back in time their methods were considered inappropriate or something coming from the western countries. People will always insult the feminists because most of the people do not believe in equality between men and women.

Maryam Namazie: So you wouldn’t agree that the demand for the right over your own body or for equality is a western demand as that is what some have said.

Aliaa Magda Elmahdy: It’s like they are stripping us from the will to be free. You’re very angry and you want to fight for your rights and then they tell you: “No, shut up, that’s not for you.”

Maryam Namazie: Obviously what you did, especially because you did it in Egypt and Tunisia, there is a great deal of risk involved. Do you regret the risk and the fact that it has changed your lives considerably?

Amina Sboui: If we regretted it you wouldn’t find us like this.

Maryam Namazie: One criticism of nude protest is that women’s bodies already sexualised and commodified and by using your body you are playing into the hands of sexists.

Aliaa Magda Elmahdy: Not our nudity. Nudity can have several meanings.

Amina Sboui: If our nudity was pornographic, we would not face any problems.

Aliaa Magda Elmahdy: Yes, they would not be that angry.

Amina Sboui: There are a lot of Arab women who do pornographic movies and who get naked in movies and nobody says anything to them. When we did it all the people started criticising us. We are doing this for good reasons. We are not doing this is a sexy way but to tell the world that the body you spend all your life either pushing me to hide it or to show it for sex, I’m using it for a political message.

Amina Sboui: there are so many women who have our ideas but they don’t have the courage to do it. When Aliaa did it she encouraged me and maybe when we do it [on 8 March in Paris], we will encourage other girls. We just hope we will keep encouraging people.

Maryam Namazie: Some will say it was fine doing it in Egypt or Tunisia but here in the west it is a different matter.

Aliaa Magda Elmahdy: We still have internet; we can still reach people with our message. We were forced to leave our countries we didn’t choose that. We would prefer to do it in Egypt but we were forced out.

Maryam Namazie: What would you say to Muslim women activists who say: “don’t force your nudity on me? I find my hijab liberating”.

Amina Sboui: we are not forcing our nudity. The pictures that they did of Muslim women against FEMEN made me laugh. It makes me feel that when Aliaa was in Egypt or I was in Tunisia, I was forcing women to get naked, telling them to take off their clothes in the street or with guns saying “take off your clothes”. We are not forcing any women.

Aliaa Magda Elmahdy: I did a campaign before to publish photos of women who willingly took off their hijab with their stories and how they were forced to put it on or how people reacted to it when they took it off. And people said “you want to force women to take off their hijab”. I said “No I want to give them a space to talk about how they are forced to wear it.”

Also the “Muslimah Pride” group posted pictures of children in hijab and then they are talking about us forcing people to take off their clothes!

Maryam Namazie: Some women’s rights campaigners will say that nudity has no place in the women’s rights movement. I think it is crucial. Would you agree and why is nudity so key?

Amina Sboui: So important because people are not used to it. In the Arab world since we are kids our mums and our grandmums keep telling us that our bodies are not yours, that we must not show your body that you must hide it. When you grow up people start to tell you to show your body. For example people never stopped telling me I must be a model. And then others tell you to hide it. So I think now the main problem for women is not education or health, we have that, (in other countries we don’t have that but in many we do) – now it is about the body.

Aliaa Magda Elmahdy: and it because of the view of the body that women can be deprived of their education and everything because they are viewed as something – not someone.

Aliaa Magda Elmahdy is the Egyptian blogger who posted a nude photo of herself as a scream against misogyny. Amina Sboui is the Tunisian topless activist who was imprisoned for her actions.